In the Tantra Shastra worship of Devi, Sanskrit letters are hidden as it were in the Sri Chakra and  Lalitha (She Who Plays) Sahasranama and Soundaryalahari of Adi Shankaracharya.

The Vedas hide the letters and Mahamantras in the Texts dedicated to the Deity.

It may be noted that the first portion of the SoundaryaLahari( was given by Lord Ganesha and the balance was composed by Adi Shankaracharya.

Lalitha Sahasranama contains these Aksharas, Alphabets in them.

Sarva Mantrathmike, Sarva Yantrathmike0Shyamala Dandakam by Kalidasa.Lalita is also known as Matrika Devi, the Goddess of the Letters of the Alphabet. In Sanskrit there are 36 consonants and 15 vowels. In some arrangements of Her yantra these letters are to be found inscribed in the various triangles and petals of Shri Yantra. The combination of the 15 Vowels (the 15 Nityas) and the consonants (the 36 Tattvas) produces all sound, all mantra, all vibration, all word, and all music.

There are 8 letter groups in the Sanskrit alphabet. These 8 groups are personified as the 8 Little Mothers, worshipped all over India. The 9th group is Lalita Herself. She is beyond language and description. It is little realised ‘that gods and goddesses do not have names, but instead are described. “She who Plays” (Lalita) is not the name of the red goddess, but merely one of Her characteristics. She is beyond Name and Form.

In the first 12 verses (shlokas) of the Vamakeshvara Tantra is given a hymn to the Goddess as the Mother of the Letters:

2. I bow to the great Matrika Devi, the Supreme Lady, who in Time is both a fraction of a second and the end of the Universe, the Destroyer and the Creatrix of Time.

3. Who is the whole perfect measure of the letters of the alphabet, worshipped by the Sun, Garuda, the Moon, the God of Love, by Lord Shankar, the God of Fire, and by Vishnu.

4. I worship the Devi of all Devis, the great Shri Siddha Matrika, whose letters of the alphabet, like moonlight, adorn the three worlds.

5. Who is the great thread of the letters of the alphabet, from which is woven the three worlds, who extends from the top of the head to the base of the spine. I worship you, 0 Siddha Matrika.

6. Who is made up of the 11 adharas (in the body), the universe-seed, the source of the primordial triangle. From the top of the head to the base of the spine you are the Origin of the World.

7. Who is the aggregate of the 8 letter-groups A-Ka-Ca-Ta-Ta-Pa-Ya-Sa, the primordial Source and Many Rayed Dweller in the centre of the heart.

8. Unfolder of the letter I, essence of essences, Most Ultimate One, I bow to you Great Devi, form of the Utmost Bliss.

9. The primordial One, of whom other gods and goddesses have no inkling. Who knows what and from where She creates? O Producer of Form and Formlessness!

10. I worship You, the imperishable letter-form from A to Ksha, O Devi, Supremely Auspicious Being. You are the Expansion Mirror, the Maya of the 36 Tattvas.

12. Dwelling at the Auspicious Sacred Seats (Pithas) of Kamarupa, Purnagiri and Jalandhara, I bow to You Great Shree Tripura, the fourfold abode of the Elements.

Vidya is feminine of mantra. Lalita has various forms of mantra, the most popular seeming to be the vidya of 15 syllables which runs Ka E I La Hrim, Ha Sa Ka Ha La Hrim, Sa Ka La Hrim. This is a mantra with three sections which correspond to Moon, Sun and Fire. There is said to be a secret 16th syllable which is the Goddess Herself. This vidya is called Kadi (Ka etc.) because of its initial letter. The Kadi doctrine deals with involution of the yantra, the Hadi vidya with evolution. These 15 syllables correspond to the 15 Kalas of the Moon.

If you refer to the pages on Shri Puja and the Bhavana Upanishad as well as the Shri Yantra figure above and the page on the Nine Mandalas of the Shri Yantra, this text becomes much easier to follow..

The Aksharas of the Devi.

I am unable to find these.

Will some one contribute?

Another logic for 18 Shakti peethas:
This is based on Sanskrit pronounciation:
(udatta+anudatta+swarita)*(hraswa+deergha+pluta)*(anunasika+niranunasika) [3*3*2] =18

3 1/2 Shakti peethas resemble the parts of devine OM:
A,U,M being the three and mmm… (ardha matra) being half.

Thirumoolar in Thirumanthiram at 1st Thanthiram in 65th Verse says Both Aryam and Tamil was Taught by Lord Siva to Parvathi. In 4th thanthiram in many verses repeatedly he has said that olden Tamil had 51 Alphabets ,15 vowels +35 consonants+1 pranavam “OHM” ……He say those old Tamil Alphabets as ” Aathi Ezuthu” from which all Vedhams and Aagamas were born.In 9th Thanthiram in one verse he has says that ” vedhas and Aagmas were born in the southern land whose border is Kanyakimari ,and it has 9 holy rivers including kavery and 7 highest mountain .Because of this reason southern region is pure in the world……….. from this we can conclude that olden Tamil which originated in Kumarikandam had 51 Alphabets during First and Second Sangam Period………After the submergence of Second sangam 5100 years before Tamil Alphabets has under gone many changes…… this submergence of Second Sangam exactly matches with submergence of Dhuvaragai….. Because of this reason All southern Indian languages and Indian languages including Sanskrit has mostly 48-51 Alphabets.including snskrit……Those languages still follow Alphabetical System of Kumari Kandam………unfortunately Tamil has Shrunken its Alphabets and Borders and created so many confusion and Problems in the history……………………..Even in Arunagirinadhar in Thirupugazh says olden Tamil had 51 Alphabets………………..

https://polldaddy.com/js/rating/rating.jsHi Ramanan, I don’t know if you have answers since your post, but I have found informations on the Panchasat (50) Shakti peethas resemble Panchast (50) matrikas on this blog : http://gokulbooks.blogspot.fr/p/blog-page_20.html
Best regards
Jai maa Kali

the research your do is a blessing to me. koti koti pranams to you and your family.

Thanks for providing me good leads.Regards.

you may be able to contact the below web sites to get more information: http://www.devipuram.com/
http://www.manidweepa.org/meditation-retreats/

Unable to get the information,ill you please forward relevant passage to help me write.Also will you find out from Google maps the information on no land mass between Somnath and Antarctica? My post Link.https://ramanan50.wordpress.com/2016/07/26/no-land-between-somnath-shiv-linga-banasthamba-to-antarctica/

Panchashat Shakti Peetas (50) correspond to the 50 Sanskrit Alphabets. The devis corresponding to each Sanskrit Alphabet are painted in the inner ceiling of Harsiddhi temple of Ujjain, Madhya Pradesh . Ujjain Mahakali is in itself an important Shakti Peetam. The photo of the matruka devis along with the alphabets is seen in the link below…………… 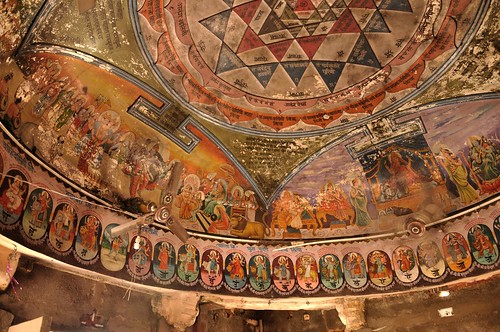 Also in Tiruvarur town in TamilNadu there is a large Shiva Temple in which Parvathy is worshippped as Kamalamba. In the Prakara as we go round the Kamalamba devi temple there is an Akshara Peedam in which Durvasa Maharishi has inscribed 51 Sanskrit Letters.

A blog on the visit to the temple is as follows.

I need to know about the ancient texts which describe these matruka moorties. Do you have any idea on the same………..

Very interesting Lots to learn , we are no where